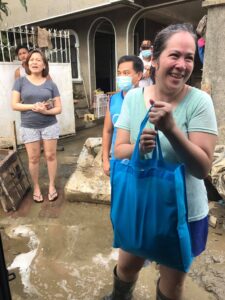 To aid the victims, the school began collecting cash donations, which was extended to in kind donations as help from the community continued to arrive as early as November 13.

Last November 14, the weekend after Typhoon Ulysses battered Luzon and caused Marikina River to rise at 22 meters, many families found their properties damaged. The school then began to reach out to its personnel from Marikina and Rizal.

Then on November 16 and 18, volunteers from the school personnel, MSMPTA, and MSMAA began visiting students to turnover relief packs that contain water, food, and cleaning supplies. Families who needed assistance were identified with the help of the students’ homeroom advisers.

The state of the students’ school materials, like textbooks, were also assessed for possible replacements.

As Marikina City continue to recover from Typhoon Ulysses, the Tulong Marista drive continues to accept cash and in kind donations. For more details, click here.